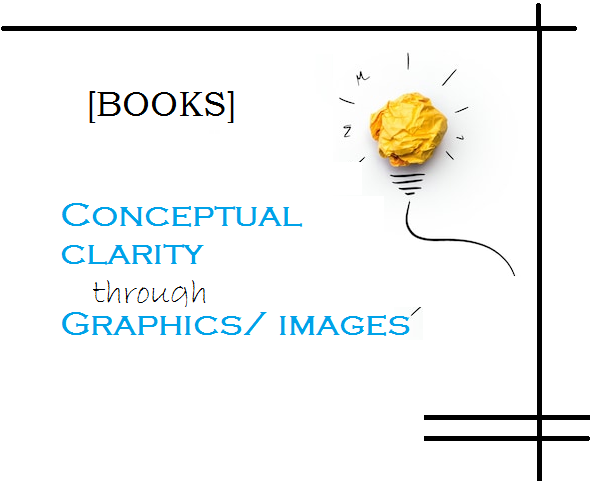 This article contains GRAPHIC books for:

You know why live teaching helps us understand a concept well? They help us in visualising a theory/concept in simple manner. These graphic guides try to achieve the same. Because a picture is more effective than a thousand words. It leaves a deeper imprint on our mind.

It is quite normal to be completely unaware of the very foundations of a particular subject during UPSC preparation. Some candidates may struggle with maintaining a consistent score in Sociology. Others may find it difficult to figure out nuances of Ethics paper. UPSC does not expect you to reproduce copied definitions of Ethical terms. They expect you to represent your own appreciation of a term. Same holds true for Sociological concepts. This is possible when you develop your own understanding of these concepts. In other words, you should be able to explain a particular concept to a layman in your own words.

AND this is what these books try to achieve through their collection of grahics/images. We are constantly exploring and updating such resources for you.

Sociology is interested in the ways people shape the society they live in and the ways society shapes them. Simply, it is the study of what modern society is and how it functions. In the series’ inimitable style, Introducing Sociology traces the origins of sociology from industrialization, revolution and the Enlightenment through to globalization, neoliberalism and the fear of nationalism – introducing you to key thinkers, movements and concepts along the way. You will develop insight into the world around you, as you engage your ‘sociological imagination’ and explore studies of the city, theories of power and knowledge, concepts of national, racial and sexual identity and much more.

UPSC Sociology, 2018
How do you relate the growth of development of metropolis and its impact on the mental and social life of people in India.

This question tests your ability to apply what you have read. This ability comes only with conceptual clarity.

The term ‘feminism’ came into English usage around the 1890s, but women’s conscious struggle to resist discrimination and sexist oppression goes much further back. This completely new and updated edition of “Introducing Feminism” surveys the major developments that have affected women’s lives from the 17th century to the present day. “Introducing Feminism” is an invaluable reference book for anyone seeking the story of how feminism reconfigured the world for women and men alike.

UPSC Sociology, 2018
“Elaborate the ‘Me Too’ Movement and its impact in India.” 10 Marks

What connects Marliyn Monroe, Disneyworld, “The Satanic Verses” and cyber space? Answer: Postmodernism. But what exactly is postmodernism? This graphic guide explains clearly the maddeningly enigmatic concept that has been used to define the world’s cultural condition over the last three decades. “Introducing Postmodernism” tracks the idea back to its roots by taking a tour of some of the most extreme and exhilarating events, people and thought of the last 100 years: in art – constructivism, conceptual art, Marcel Duchamp, Jackson Pollock and Andy Warhol; in politics and history – McCarthy’s witch-hunts, feminism, Francis Fukuyama and the Holocaust; in philosophy – the work of Derrida, Baudrillard, Foucault and Heidegger. The book also explores postmodernism’s take on today, and the anxious grip of globalisation, unpredictable terrorism and unforeseen war that greeted the dawn of the 21st century. Regularly controversial, rarely straightforward and seldom easy, postmodernism is nonetheless a thrilling intellectual adventure. “Introducing Postmodernism” is the ideal guide

INTRODUCING guide to the hugely influential German thinker. Georg Wilhelm Friedrich Hegel is one of the greatest thinkers of all time. No other philosopher has had such a profound impact on the ideas and political events of the 20th century. Hegel’s influential writings on philosophy, politics, history and art are parts of a larger systematic whole. They are also among the most difficult in the entire literature of philosophy. Introducing Hegel guides us through a spectacular system of thought which aimed to make sense of history. The book also provides new perspectives on contemporary postmodern debates about ‘metanarratives’ (Lyotard) and the ‘end of history’ (Fukuyama). It is an ideal introduction to this crucial figure in the history of philosophy, and is indispensable for anyone trying to understand such key modern thinkers as Marx, Lacan, Satre and Adorno.

Marx borrowed the idea of dialectics from Hegel. There are many questions on dialectics in UPSC Sociology.

Was Marx himself a ‘Marxist’? Was his visionary promise of socialism betrayed by Marxist dictatorship? Is Marxism inevitably totalitarian? What did Marx really say? “Introducing Marxism” provides a fundamental account of Karl Marx’s original philosophy, its roots in 19th century European ideology, his radical economic and social criticism of capitalism that inspired vast 20th century revolutions. It assesses Marxism’s Russian disciples, Lenin, Trotsky and Stalin who forged a ruthless dogmatic Communism. The book examines the alternative Marxist approaches of Gramsci, the Frankfurt School of critical theory and the structuralist Marxism of Althusser in the 1960s. It marshals postmodern interpretations of Marxism and raises the spectre of ‘post-Marxism’ in Derrida’s confrontation with Fukuyama’s ‘end of history’ doctrine.

Marxist school of thought is a hot topic in UPSC. You can even use these concepts smartly in Essay and GS 1.

What is the place of individual choice and consequence in a post-Holocaust world of continuing genocidal ethnic cleansing? Is “identity” now a last-ditch cultural defence of ethnic nationalisms and competing fundamentalisms? In a climate of instant information, free markets and possible ecological disaster, how do we define “rights”, self-interest and civic duties? What are the acceptable limits of scientific investigation and genetic engineering, the rights and wrongs of animal rights, euthanasia and civil disobedience?”Introducing Ethics” confronts these dilemmas, tracing the arguments of the great moral thinkers, including Socrates, Plato, Aristotle, Hobbes and Kant, and brings us up to date with postmodern critics.

If you are struggling with scoring good marks in Section-A (theory portion) of Ethics paper, you can go for this book.

Illustrated INTRODUCING guide to the pre-eminent philosopher of the Enlightenment. Immanuel Kant laid the foundations of modern Western thought. Every subsequent major philosopher owes a profound debt to Kant?s attempts to delimit human reason as an appropriate object of philosophical enquiry. And yet, Kant’s relentless systematic formalism made him a controversial figure in the history of the philosophy that he helped to shape. Introducing Kant focuses on the three critiques of Pure Reason, Practical Reason and Judgement. It describes Kant’s main formal concepts: the relation of mind to sensory experience, the question of freedom and the law and, above all, the revaluation of metaphysics. Kant emerges as a diehard rationalist yet also a Romantic, deeply committed to the power of the sublime to transform experience. The book explores the paradoxical nature of his ideas and explains the reasons for his undiminished importance in contemporary philosophical debates.

This book is a well – written and beautifully illustrated book that aims to introduce the fundamental concepts that form the crux of economics. Economics is one of the most – pertinent subjects in the modern world. It is the science that keeps governments and businesses afloat, by understanding the different facets of economic activities such as production and consumption. Understanding the concepts of economics is vital for everyone who is tied to society and this book makes for an ideal launch pad.

[For beginners] Practical step by step guide to UPSC Prelims